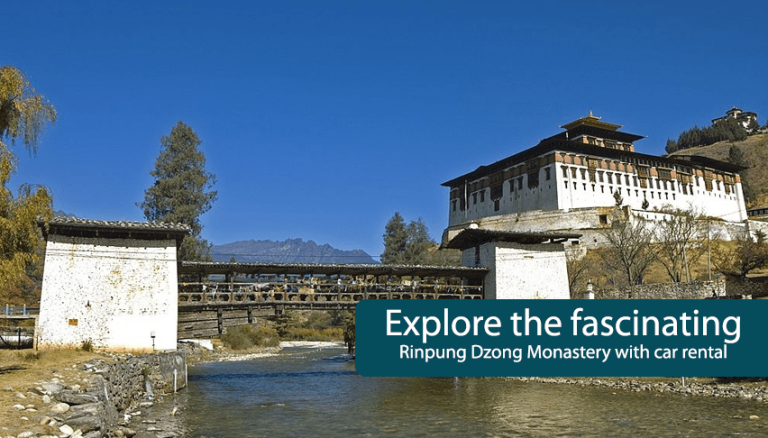 Bhutan is a diverse, natural county which offers a staggering variety of landscapes as well as an incredible array of flora and fauna. The country is set within one of the world’s breathtaking mountain ranges, is famed for its high mountain peaks and trekking opportunities.

Bhutan is filled with culture, mountain forts, monasteries and images of Buddhist religious figures. With these amazing and wonderful sights to watch, Bhutan is surely the “Last Shangri-La”.

Rinpung Dzong Monastery for a one day trip

Rinpung Dzong Monastery is a large Drukpa Kagyu monastery and fortress in the Paro district in Bhutan. The walls that tower over the town are visible throughout the valley. Previously it was a meeting hall for the National Assembly but like the present Dzongs now it houses the preservation of the monastic body, government offices along with local courts.

The chapels have been closed but it is worth visiting to see the stunning Bhutanese architecture and views.

Across the Paro Chhu, the construction of Paro Dzong began in 1644 on the instruction of Zhabdrung Ngawang Namgyal. The Dzong was named Rinpung Dzong which means “Fortress on a Heap of Jewels”. The Dzong was constructed on the foundation of the monastery built by Guru Rinpoche.

It survived a massive earthquake in 1897 and was ravaged and destroyed in the year 1906. It was built again after a few years and one can get glimpses of this majestic architectural masterpiece throughout the valley.

The Dzong is built on a steep hillside and the front courtyard of the administrative section is quite higher than the courtyard of the monastic portion. The road to the National Museum leads down to the Dzong’s north-eastern entrance which leads into the dochey (courtyard) on the third storey. The central tower inside the courtyard is five stories tall and was built during the time of the first Paro governor.

To the East of the central tower is a small Lhakhang dedicated to Chuchizhey, an eleven-headed manifestation of Chenresig. A stairway which leads down to the monastic quarter is a house of 200 monks. The monks’ classroom is on the left of the monastery. The large prayer hall opposite the monastery has lovely exterior murals showing the life of Tibet’s poet-saint Milarepa.

Outside the Dzong, is a stone-paved festival ground. Below the Dzong, there is a traditional wooden covered bridge known as Nyamai Zam across the Paro Chhu.

The first day of the spring Paro Tshechu is held here in this courtyard. The monks danced with colorful masks and costumes. This festival is celebrated to honor Guru Rinpoche.

A flight of about 120 steps leads to the huge paintings of the four kings of the world and the Circle of Life. There are fourteen shrines and chapels located within this monastery. Beautiful temples and wall paintings are also a major attraction of this monastery-cum-fortress.

The serenity of the Rinpung Dzong can be visited at any time of the year but then you must keep the timings in mind before visiting the monastery. The doors of Rinpung Dzong stays open from 8 am to 6 pm for the whole week but during the winter season of November to December the monastery stays open till 4:30 pm.

The courtyard of Dzong stays open daily, but on weekends the offices and chapels remain closed. The Indian tourists can enter the monastery by producing their ID Card. The entry charges are not needed before entering the monastery.

A road trip can be memorable sometimes

Bhutan is a host of many tranquil monasteries, dazzling temples, colorful festivals and picturesque landscapes. Rinpung Dzong monastery is one among them which is a worth to visit in Bhutan. So plan your trip with a car rental in Bhutan provided by the reliable travel agency AV Tours for a delightful journey to this monastery.