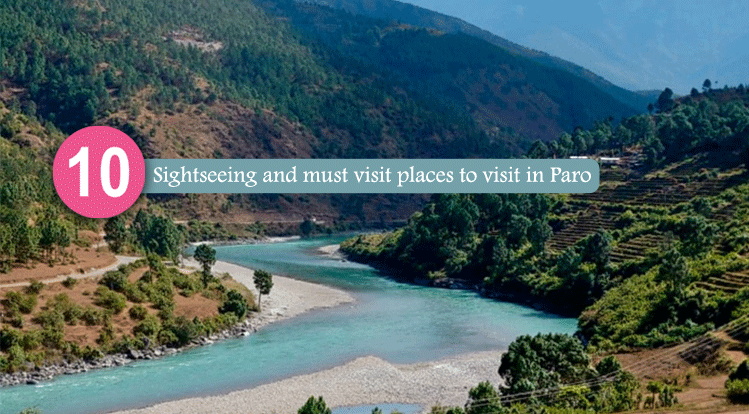 It’s always good to know before you go

Paro is a beautiful escape from the everyday rush of our lives. It is a perfect destination for those nature lovers who like to spend some quiet and peaceful times alone or with their loved ones.

Paro is a deep valley and stands at an altitude of 7200 ft.  It is also the only international airport out of the four airports in the country. It well connects the neighbouring Asian countries Paro is a valley town west of the capital, Thimphu and it has quite a lot of sacred sites here which makes it a religious travel destination too.

How to reach Paro:

You have a lot of options to either fly or take the road to Bhutan. It has three land borders. One would be in West Bengal in Jaigoan region which opens up to Phuentsholing and the two other borders would be in Assam, Samdrup Jongkhar and Gelephu.

By road, the preferable land border is Phuentsholing which also has the offices of the Bhutan tourism Departments which offer permits to visit the country to tourists. However Indian tourist can just carry their national identity and are free to visit up to a certain point beyond Phuentsholing after which they too have to obtain a permit.

By Air: There are many flight options and some direct flights connecting Bhutan to India and other South Asian countries through flight connectivity with the cities of Delhi, Kolkata, Bangkok, Kathmandu, Bagdogra, Delhi, Suvarnabhumi, Dhaka, Gaya, and Guwahati.

By Road: After you reach Phuentsholing you have to hire a taxi to hire until Thimpu which is around 170 km away from the border state and then from Thimpu you can head to Paro, roughly another 50 km.

Choosing the right and cheaper option till Paro:

Car hire in Bhutan comes with a lot of options for car rental service in Bhutan. The rental cars in Bhutan can be arranged online as there are many travel agents who run active websites which provide car rental in Thimpu Bhutan. You may in advance research about the Bhutan car rental rates to different cities through their Tourism website or you can book a car rental for Bhutan tour after personal meeting the driver of the taxi who agrees to take you. Bhutan cars provide some exported cars which you can choose for your travel according to your choice. The car charge in Bhutan is non-fluctuating and always follows the rates fixed by the government, so you do not worry about overpricing.

The warm people will make your 6-hour journey, a memorable road trip of your life.

The kingdom of Bhutan has in its constitution an amendment which asks for around 65 percent the country land to be kept untouched and forested. It has to be strictly followed and so we saw how beautiful Paro was when we finally arrived there. The driver told us everything I could possibly Google about Paro. It was a peaceful town and the air I was breathing had never felt so fresh and soul refreshing. The next day we started our most awaited Paro tour.

Here we present to you the attractions here in Paro that you should not miss:

At an altitude of 10531 ft and around 10 km north of Paro lies the historic temple Taktsang Lhakhang, this is common to tourists as ‘The Tiger’s Nest Temple’. The Tiger’s Nest Temple is situated 900 metres above the Paro valley and is one of the most iconic and a religious site, you cannot afford to miss. It is a heritage site with an unbelievable history behind its construction.

It is said that around 1692 The Guru Rimpoche flew on top of the Tigress and arrived here in the cave. To subdue evil powers and demons residing within the cave, he meditated here for 3 months, 3 days and 3 hours.  Ever since the Tiger’s Nest has served as a temple of utmost importance in Bhutan as well as photogenic background for visitors who climb right to the top to have a glimpse of this historical masterpiece. 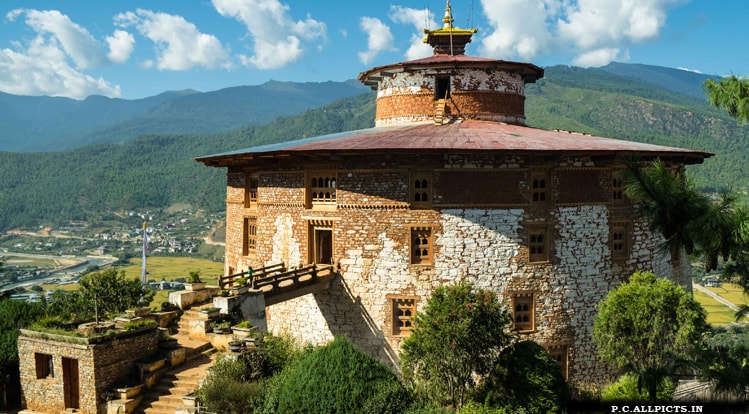 The site for the present National Museum of Bhutan served as a watch tower in 1649, to protect the undefeated dzong. The building was renovated in the 1960 ‘s which was then converted into a National Museum. The museum contains, hundreds of ancient Bhutanese artefacts, artwork, traditional costumes, armour, weaponry and some unique handcrafted local products.

The National Museum preserves the rich cultural traditions of the country. Please note that photography inside the Museum is not allowed however you can click the surrounding grounds and Ta Dzong. 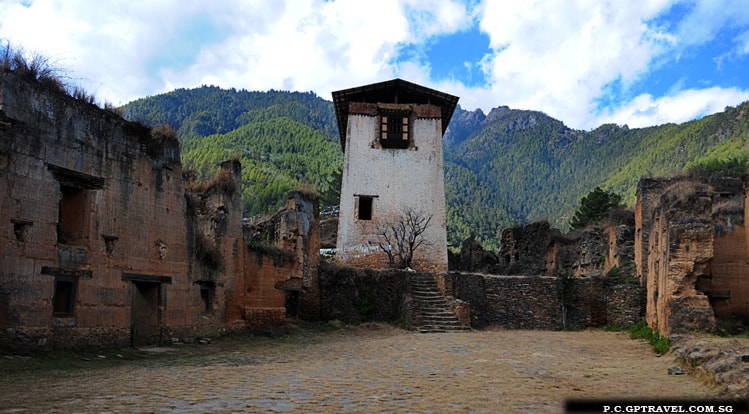 Around 14 kilometres from Paro lies the ruins of the fortress which was constructed by Zhabdrung Ngawang Namgyal in the year 1646 to celebrate his victory over the Tibetan invaders in 1644. The site for this Dzong was decided to be built due to its control of the route to Tibet.

Sadly the fortress was destroyed by fire in the year 1951 but the ruins still are impressive as well as an imposing sight. The main attraction of this structure was a false entrance which was used to lure returning Tibetan invaders into an enclosed courtyard. 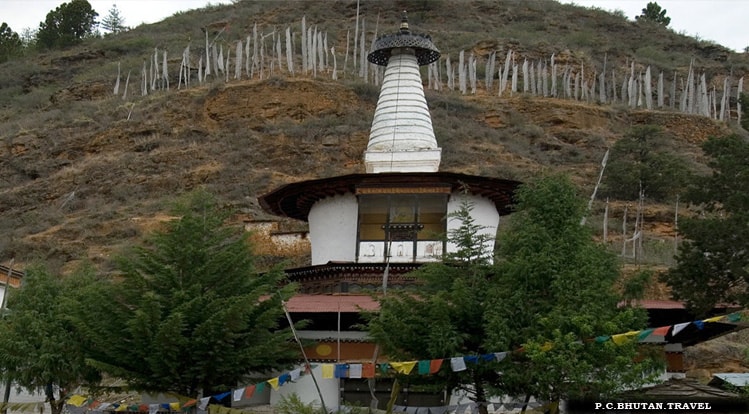 It is one of a kind Buddhist temple in west Bhutan. The temple is in form of a Chorten which is very rare in Bhutan. It lies in the Jangtsa valley in Paro. The temple lies on the edge of the hill between the Dopchari valley and the Paro valley. This unique shrine is a repository of the Drukpa Kagyu school.

There are many explanations behind the building of this Buddhist shrine. Some say that the Shrine was built by the saint Thangtong Gyalpo to overcome a bad force that was supposed to exist at the foundation of the chorten. There is another theory which states that Lakhang was built on the head of a demoness. No one knows the exact fact behind the Lhakhang but all these historical suggestions add to the unique and historical value of the Lhakang.

5. Dogar Dobji Dzong- One of the first Dzong in Bhutan: 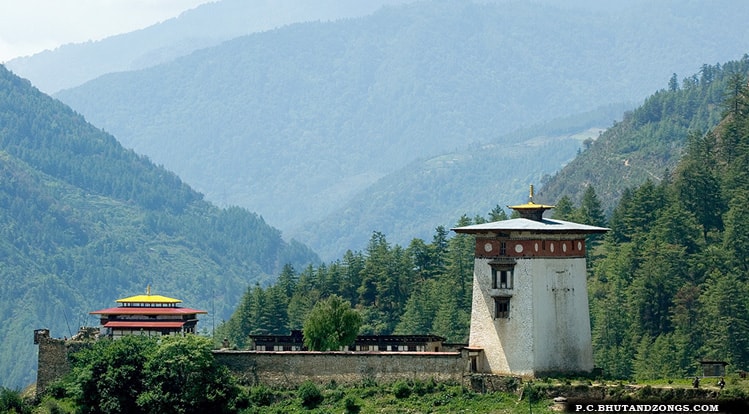 A Dzong is supposed to be Bhutanese fortress which was supposed to act as a stronghold against enemies in the past. The Dzongs now serve as important administrative, religious and social site.

The Dogar Dobji Dzong is supposed to be the first model Dzong in Bhutan. The name Dogar actually means white border, a reference to five white borders in the village of Dogar. The Dzong was built by Ngawang Chogyal, the brother of Chojie Drukpa kuenley in the year 1531.

The history of its creation is very interesting. Ngawang Chogyal decided to follow the spring which originated below the throne of Jetsun Milarepa in Tibet. The source of the spring was then found to a rock which was located here in the current location of the Dobji Dzong. So it carries a lot of significance, especially to the Buddhists. 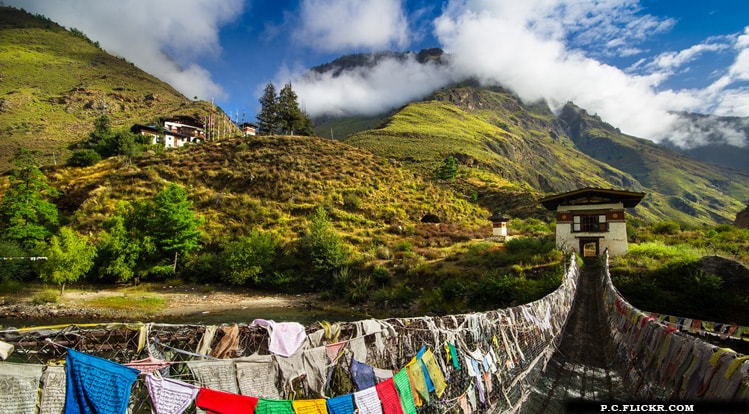 Thangthong Gyalpo was a 13th century Saint who was also a bridge builder. The temple of Tamchog Lhakhang was dedicated to the holy saint Thangthong Gyalpo. The temple is located across the river from Paro to Thimpu. Reaching the temple would have been hard if the current iron chain bridge never existed. This bridge was built to connect the two sides by Thangthong Gyalpo himself.

These iron chain hanging bridges are one of the few that can still be found in Bhutan. There are many tourists who come here to visit the bridge which offers a good site to click beautiful pictures. However, the temple is a private entity and cannot be visited without permission.

This bridge is relatively very old and it’s swaying and undulating movements can be quite a thrilling experience for anyone who visits. 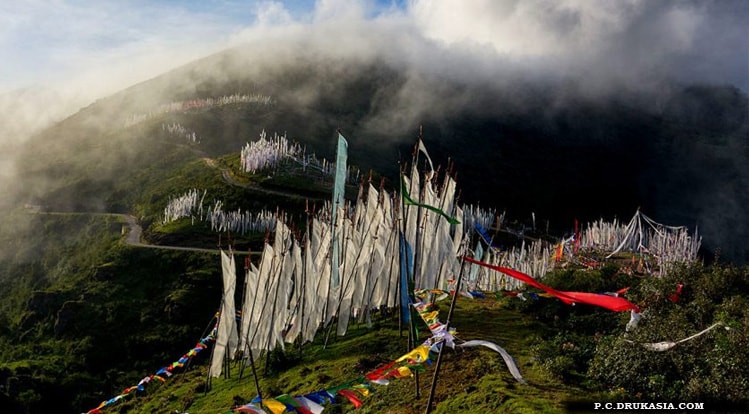 The CHELE LA PASS lies at an altitude of 13000 ft and is considered to be one of the high altitude motorable passes in Bhutan. It lies at an hour’s drive from Paro. The road to the valley is filled with pine, rhododendron, lush valleys and also provides a perfect view of the mountains of Jumolhari, Jichu Drake and the adjoining peaks of the North West.

This stunning pass on a clear day also provides a stunning view of Paro and Haa valley too. 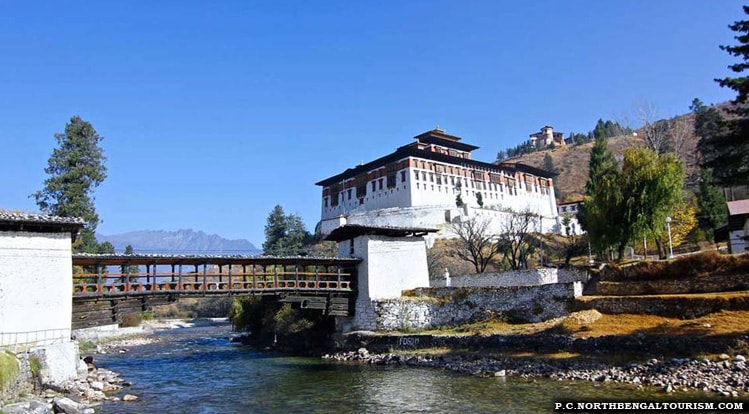 Rinpung Dzong was built in 1645 by Shabdrung Ngawang Namgyal. It successfully helped in defending against the Tibetan invaders during the seventeenth century. The Paro Dzong gives out an excellent example of Bhutanese architecture. Before being a Monastic body and housing several district government offices it served as a meeting hall for the National Assembly.

Due to the strong built and structure of the Dzong, it managed to survive the horrific earthquake in 1897 but was badly damaged by fire in 1907.  Every year in front of the Dzong is a stone-paved festival ground where dancers perform the local dances of the Tsechu.

9. Haa valley- the viewpoint to Mt Chmolhari and Jichu Drakey: 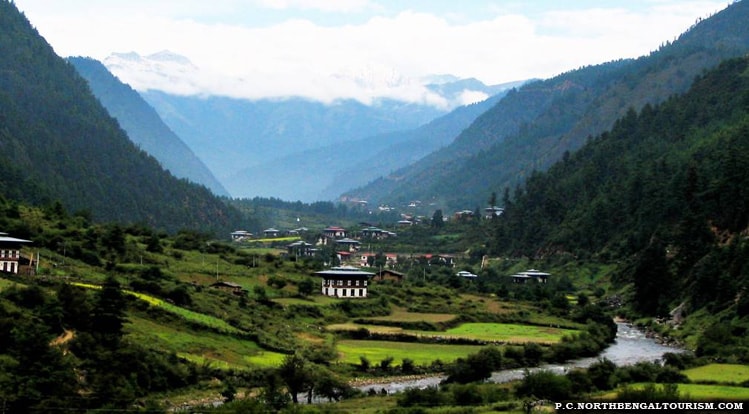 It is a narrow but a peaceful valley which lies at an altitude of 9000ft. The valley stretches further along Haachu river. The valley was an active trading point between Bhutan and the Chumbi valley, Tibet. You must pass the Chele la pass to reach the Haa valley.

From last year, one needs a permit to visit the valley of Haa. The Haa valley is most beautiful if visited during April/ June-September/ mid-November.

From the Haa valley, one can have a superb view of Mt. Chomolhari and Jichu Drakey.

10. Ugyen Pelri Palace- an example of Bhutanese architecture and designs: 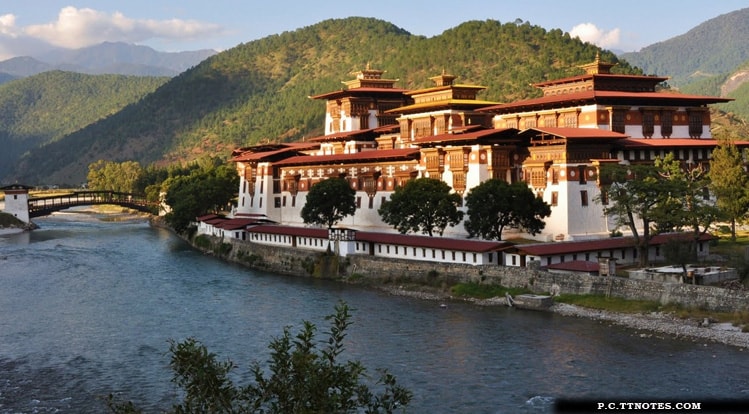 The secluded wooden and braky compound of the Ugyen Pelri Palace was built in the early 1900’s by the Paro penlop. It was designed as an inspiration to Guru Rinpoche’s celestial paradise, Zangto Pelri. It is a magnificent example of Bhutanese architecture and designs.

It is currently been resided by the queen dowager and is thus closed for a general public visit. Beside the Ugyen Pelri Palace are 5 shrines that were built in memory of the king Ugyen Wangchuk.

It provides an amazing picture with a perfect background is worth the visit when in Paro.