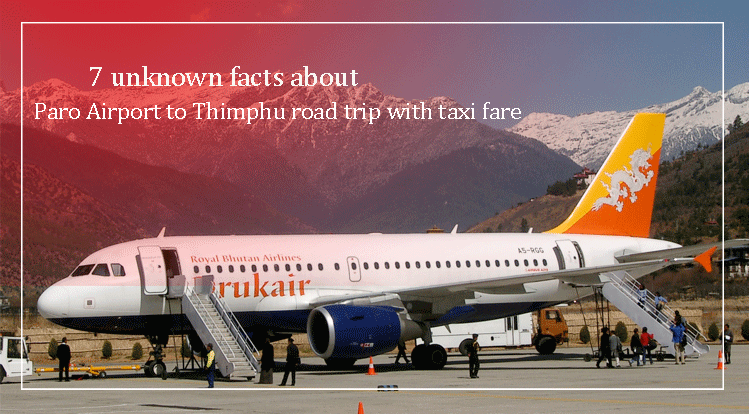 Flying to Bhutan? Paro is the only international airport in the kingdom of Bhutan. It is well connected by flights from India, Kathmandu, Dhaka, Bangkok, Singapore, etc.

Thimphu, the capital city and the administrative seat of Bhutan is located in the western valley of the kingdom.

The approx distance between Paro to Thimphu is km, and it takes about 1hour 16 minutes, covering a distance of 47. 6 km to reach Thimphu from the airport, for which you can avail Paro airport to Thimphu taxi at best fare!

So, once you reach Paro, you will be handed over your tourist permit and your taxi will transfer you to the Thimphu after the long one hour across the Himalaya kingdom to your hotel in capital city Thimphu.

Bhutan, being the country of mysteries and cultures will never let even a bit of monotony during your trip.

Whether it is during flying to Paro across the steep Himalayas or stepping into the kingdom, you will be mesmerized by the allure, uniqueness, and authenticity of the Dragon Kingdom.

While planning a trip to Bhutan it is advised to book hotels, flights at the earliest, at least 3 months prior to your visit to get the best accommodations, to get discounts, and to shun the hassles.

As far as Paro to Thimphu taxi fare is concerned, it depends upon the type of vehicle you choose.

So, here are the top 7 unknown facts and the things that you will come across while road tripping with Paro to Thimphu taxi services.

1. You breathe in the air of Happiness and peace-

Bhutan is rightly called the kingdom of bliss, as the country ditched the GDP over the philosophy of Gross National Happiness. You need not seek happiness in Bhutan; you will simply feel it as soon as you step into the land of thunder dragons.

Besides, as you descend closer to the landing, you will feel the vibe of genuine peace, authenticity, and bliss. All these elements will either leave you stunned or out of words.

2. Visiting Bhutan in peak seasons? Immerse in the riot of colors-

Bhutan is the only carbon negative country in the world with more than 70 % forested regions.

Besides, His Majesty, the king of Bhutan also emphasizes on planting more trees on special occasions.

So, if it’s the springtime you’re visiting Bhutan, you will witness the valleys and woodlands covered with brilliant hues of rhododendrons, primulas, jacquandra bloomed monastery courtyards and the dazzling festivals that paint the tranquil kingdom with zest and enthusiasm.

As you drive from Paro to Thimphu, you will see many magnificent Dzongs that are built in 16th and 17th centuries.

Most of them are built as the fortresses, or to serve the purpose of the watchtower, to keep eye on the enemy.

Dzong is basically built on the lofty areas, overlooking the valleys or the confluence of the rivers, because these regions are considered vulnerable and prone the point of entry while the enemy would attack.

Dzongs stand till date, symbolizing the victory over enemies

4. Dotting monasteries with myths and legends-

Bhutan is the land of magic, myths, and monasteries. You would agree to this as you drive past to several of the old, dazzling, golden monasteries.

One of the most sought-after monasteries in Bhutan is Paro Taktsang Lhakhang (Tiger’s Nest) located in Paro.

It is mysteriously built on the edge of a steep cliff that evokes the sentiment of wonder and praise.

It is one of the major Buddhist Pilgrimage Site in Bhutan that stands as a sole witness for the myths and legends that the country holds.

5. The Kingdom of Culture and traditions, citizens clad in National attire-

Who wouldn’t feel one’s out of the world being in a country that contradicts with the rest of the fast-paced world?  Amid the hassles and the thriving technologies, Bhutan still holds on to its age-old customs and traditions.

You will be very much surprised to see the Bhutanese men and women, both young and old, adolescent and kids, dressed in their traditional costumes!

All unique and beautiful, it works as a bonus point for someone who’s interested in photographing people and places!

6. You will drive across some of the loftiest motorable passes in the country-

Bhutan is immensely blessed with stunning landscapes and varied landscapes.

So while road tripping from Paro to Thimphu, you will drive pass stunning landscapes and vales, glacial rivers, quaint villages, and yes its worth mentioning that you will drive across the highest motorable passes in the kingdom.

Here, you can halt for a while for some refreshments, and enjoy the sweeping mountain vistas and for some stunning clicks for your social media posts!

7. Drive on the road that is empty and witness the only city in the world with no traffic lights-

As the number of tourists in Bhutan is limited on top of that the country itself is sparsely populated, so it is obvious for peace seekers to find peace even when one is driving.

To be precise the roads in Bhutan is sparsely crowded and even empty.

As you reach the capital, Thimphu, you will be surprised to witness the city devoid of traffic lights, where policemen will redirect the vehicles without fuss, and without causing any clamor and inconvenience. Isn’t that amazing!

However, the rates may vary depending upon the choice of vehicles and hike and drop in fuel cost.

So, pack your bags and say hello to the realm of magnificence and myths!